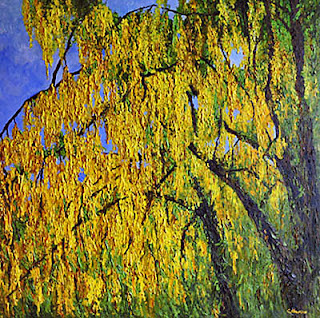 Wisteria flowers bloom in a variety of colors; purple, blue, pink, yellow or white. They are known for longevity. To date, the oldest one know was planted by a Buddhist monk 1000 years ago in the central Kanto region of Japan. They continue to stand bringing forth beautiful purple blooms the end of April to early May.  In 1395, an Imperial Prince planted them in the southern Prefecture he lived and designated "The Wisteria" a national natural treasure. And for that reason, they are also know for honor.

European families mark the ages of generations passing with the growth of this vine, and so it makes sense the vine embodies an essence of immorality. Fathers and grandfathers tell their sons of stolen kisses beneath the same wisteria that grew during the day of their great grandfathers life.

Perhaps that's why a romantic feeling began before the creation of "Wisteria" and carried forth throughout the six week painting process. For memories standing below these stunning yellow blooms and looking upward was magnificent. So what better time was there than to create a painting depicting these vines for a collector to enjoy in the present, and share stories for generations to come?

Christine M. Nauman
Christine Nauman is an accomplished artist working in oil on canvas for over twenty-seven years. She combines a tonal palette with delicate brush strokes applying numerous layers of oil for her tranquil landscapes of autumn and winter scenes with emphasis on the changing light of day. Nauman's bucolic landscapes of spring and summer seasons are created with an impressionistic color palette and oils are thickly in numerous layers. The texture and additional depth of vivid colors have been compared to both French and American Impressionists of the 19th century by collectors. Still life paintings are staged in her studio and often compared to works by the 16th century Dutch Masters due to their darkened backgrounds and realistic details within. As of 2018, her original oil paintings are in over fifteen hundred collections. Many of these patrons around the globe remain in contact and continue to add onto their art collections. Additional paintings of hers are acquired through fine art galleries. www.christinenauman.com provides detailed biography and available paintings through her Illinois studio.