Christmas past and present 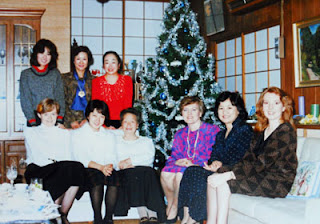 While trying to finish up a few paintings before the end of this year, some of the evenings I've leafed through photos that I might apply to future compositions. I've come across one the other day that was taken at a Christmas holiday I spent with friends when I lived in Tokyo.

So now, while spending the 2011 holiday with family and friends, I realize how fortunate I am to find pleasure and gather friendships wherever I live.

Symbolism of Sunflowers and Lemon in Still Life Painting 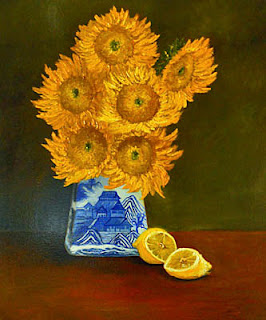 ﻿The six sunflowers arranged in my circa 1930's Ringtons Tea Canister was another composition of mine created from a deep, personal dimension.  The color of the solar shaped blooms facing forward as I painted them complimented the sharp contrast of the blue-white pattern on the canister and another contrast in color with the lemon near that.

Recently, a southern collector of mine mentioned that a lemon signifies "bittersweet memories" after I shared with her my own research beginning with the artists of the 1500's placing certain objects in their paintings to give it meaning.  And naturally, adding further interest of their work to their patons.  Afterall, an artist's work is their subsistence.

With my new knowledge, I decided to place a solitary lemon into the arrangement.  First, for overall artistic beauty, and second for memories of my past travels throughout the South of France while the sunflowers were in full bloom.  Then thoughts of Van Gogh surfaced in my mind as his most prolific years painting were when he lived in the South of France.  "Bittersweet" seemed to be the correct meaning and my cutting the lemon in half was a balance of pleasure and pain in his later years.

Every painting should tell a story as it's not only about placing a painting on the wall.  It must move us beyond the visual. Then it starts our own imagination flowing, and our own memories surfacing.  It adds to conversations for patrons that share their personal collections with others.  Everything becomes more interesting.  More dimensional.

So . . . as time goes on, I'll continue to share more regarding paintings I create as I've been doing throughout my career. 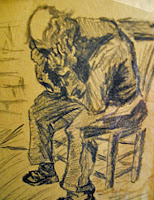 Van Gogh's "Old Man in Sorrow (On the Threshold of Eternity)" painting had meaning for me years ago.  Thus, this sketch I drew in '72 for an art class inspired me.  I recall showing someone what I created, and their eyes filled with tears.  I realized early on that viewing art fills us with emotions.  Perhaps as much as creating it?﻿

http://www.christinenauman.com
Posted by Christine M. Nauman at 8:02 AM 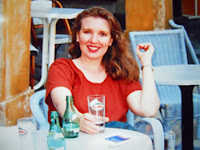 The original painting "Villa Balbianello" located on Lake Como in Italy was acquired ﻿from my studio by one of my Minnetonka patrons.  The painting was first placed in their Versailles Suite, before moving her to their dining room at their permanent residence in MN.

It's a wonderful feeling when patrons share photographs of how their art collection is displayed. 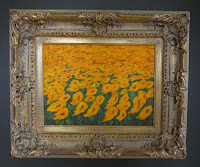 I find inspiration everywhere.  Everywhere I look.  Everytime I recall sites from memories.  Paintings I completed also bring forth inspiration.  I always pay attention to my senses.

The recent concept for the above painting was from a North Shore patron of mine who acquired two ethereal landscapes and a Monet-like garden painting in the late 1990's.

http://www.christinenauman.com
Posted by Christine M. Nauman at 9:15 AM

Tokyo then and now

Lately, my emotions are on the recent devastation in Japan from the earthquake and tsunami.  As living in Tokyo four years in the 1980's, I can recall often feeling the earth trembling under my feet, and being in some of the top floors in tall buildings when they swayed. I would see sites from windows never seen when the ground was still.  It was always a paralyzing fear until it settled down.

I recall one night early fall, having the windows open in my home, and hearing Japanese conversations within homes of nearby neighbors through their open windows.  Birds chirping in the trees. The gentle sounds of life.  All enjoying a warm, beautiful evening. Then suddenly, a roar under my home!  As if a subway train raced by; there were none.  Then everything shook.  Books came toppling off shelves. I tried running down the hall to stand under my front door's threshold.  I couldn't make it as I fell due to the violent shaking of my home.  Then everything stopped.  And there were no sounds outside. Even the birds stopping singing.  It was as if we all waited for more to come as aftershocks were common.  There were none afterwards.

I was told the next day that just before the stronger quakes strike, "the ground warns us."  My experience was minor in comparison to March 11th.  And for me, 7 months later, I returned to the states to live and work on stable ground.

Recently, I located one of my favorite black and white photos of a home in my neighborhood.  I lived in Kami-osaki of Shinagawa-ku, Tokyo.  Approx. 300 yards from Meguro train station.  The neighborhood was especially lovely as there were many old homes within gated walls. The entrance to this private residence was behind these old wooden gates.  I loved how the smaller door could only fit one person as a protection for the owner to easily defend himself with sword from being captured during olden times.  That door is to the right in the photo.

I would walk past the gates often during the week to/from the train station to my office at the Daichi-Seimi building in Shinjuku.  It was sometime during my 3rd year living there, the owner's wife would stand outside the balcony of the 2nd floor window in her kimono and slightly bow when our eyes connected at the end of the day. We never spoke as my Japanese language skills were weak.  However, I felt she accepted me as a resident in her husband's neighborhood.  "Her husband's" I say, as his was the oldest and largest of one of the first homes in the area.  Family tradition is strong in the Orient as each generation passes their home to the eldest male child.

I would stop and turn to her with a mannerly bow of respect and continue on to my home with warmth in my heart.  My last year living there, I decided to turn my bow into a friendly smile and hand wave, and her warmth mirrored mine.  This was one of my daily routines I looked forward to.  Perhaps one of hers as well?

I now ponder, is their home still standing? I truly hope so. The owner was in his late early 70's.  Does the same family still live there? They did have a son.  I never met, or saw.  I ponder also if she thought of those moments with me years later?  I have always felt life is ever more beautiful when our souls continue to touch each other.  Surpassing distance and time.

So here I sit, years later in the office next to my studio sharing a memory and living in the mid-west.  A part of my heart will always remain in Japan.  For my wonderful life adventure and memories, I will always smile as it is why I am the person I am today.  And then, thinking what they all felt on the 11th and lost, and experiencing this very moment . . . I will always feel sorrow.

http://www.christinenauman.com
Posted by Christine M. Nauman at 10:45 AM 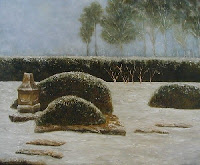 Oriental Garden has been created from a pencil sketch by placing a number of my photos of public and private gardens in Japan and China.  Artistic license flows well in my studio when I draw upon those personal experiences from living in Japan and travel throughout China in the early-mid 1980s as I was working the painting. By placing the numeric groups of three and five within; 3 shrubs, 5 stepping stones, and 5 dwarf trees in front of the hedge I remained true to the oriental philosophy.

This is another painting which tells an interesting story and blends well with the artist to be treasured infinite lifetimes.

http://www.christinenauman.com
Posted by Christine M. Nauman at 10:00 AM